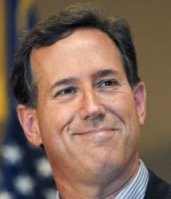 Mitt Romney might be giving Rick Santorum a bruising fight in the race for the Republican party’s bid for the White House, there’s one platform where Santorum is sure he tops his opponent: gaming.

The former Pennsylvania senator, it seems, has a passion for the iPhone game Temple Run, a title that has players endlessly fleeing a band of screaming, angry simians after defiling their temple.