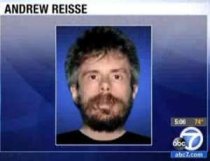 Scott Reisse, the 33 year-old co-founder of the company that makes the Oculus Rift virtual reality headset, was struck and killed in a Santa Ana crosswalk Thursday by a car that was attempting to avoid the police.

KABC reports that a car allegedly driven by 21-year old Victor Sanchez struck two other cars and ran through several red lights — including the crosswalk where Reisse was walking — in a high-speed chase. Sanchez and two other suspects in the car were taking into custody. Police say all are gang members on probation with outstanding warrants. Reisse died at the scene.