at the center of an increasingly heated debate these days, but when you look at the hard numbers, games carrying a ‘Mature’ rating aren’t quite as big a part of the video game industry as they seem.

The ESRB — the board that assigns ratings to games released in the U.S. and Canada — says only 9 percent of the 1,218 games released last year received an ‘M’ rating. Such games are intended for those 17 and up and “may contain intense violence, blood and gore, sexual content and/or strong language.” 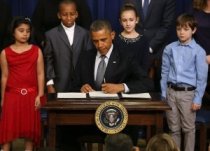 Barack Obama, as part of a wide ranging proposal to reduce gun violence, has ordered the Centers for Disease Control to launch a study into the correlation between violence in video games and the real world.

The order, which does not require Congressional approval, was part of a Presidential Memorandum that laid out 23 actions designed to curb violence.

the wake of the Sandy Hook school shooting in Newtown, CT, the National Rifle Association squarely pointed a finger of blame at the video game industry. But that isn’t stopping them from releasing their very own game.

On Monday the group released NRA: Practice Range, an iOS app that’s rated not for mature users, but for anyone ages 4 and up.

the town of Southington, Connecticut decided at the last minute to cancel its controversial plans to collect and destroy violent video games, a Massachusetts town is following in its footprints.

The town of Melrose, Massachusetts is planning to launch a program that would encourage kids to turn in violent video games in exchange for gift certificates and homework-free nights. The city’s mayor, Robert Dolan, says he hopes to have things up and running by the beginning of February.

Connecticut town that raised the ire of gamers when it announced plans to collect and destroy violent video games has changed its mind.

Officials in Southington, which is located just 30 miles northeast of Newtown, the site of last year’s horrific school shooting, opted to cancel the Violent Video Games Return Program amid widespread criticism from both psychologists and leading family-focused sites (including Common Sense Media).

Connecticut residents continue to try to come to grips with the horrific school shootings in Newtown, one nearby city is calling on citizens to round up and destroy their violent video games.

On Jan. 12, citizens of Southington, located about 30 miles to the northeast of Newtown, will have the opportunity to visit their city’s drive-in theater and deposit violent games in a trash bin in return for a $25 gift certificate to a family-friendly local attraction.

tragic school shooting in Newtown, CT has once again revived the debate about the impact of violent video games in the media. Senators are calling for hearings. Groups like the NRA are pointing a finger of blame at the industry. And parents are confused and scared.

Aside from a couple of statements from the Entertainment Software Association and Entertainment Consumers Association, the industry has kept its mouth shut about the shooting — and it’s likely to do so for some time. There is, after all, no upside in walking into the fray.

But December wasn’t the first time the issue of video game violence came up. At E3 in June, show goers debated whether the level of violence in demos was over the top. I had a chance to discuss the issue with several CEOs of major publishers.

horrific events in Newtown, Connecticut have re-ignited the debate about video game violence in the media.

Friday morning, the National Rifle Association was the latest to chime in, pointing the finger of blame at many forms of media and entertainment with a specific focus on video games.

the heels of the tragic events in Newtown CT, the subject of video game violence has once again been thrust in the spotlight. As the discussion reached critical mass, Fox News Radio asked me to speak with several stations in their network on the subject. Here’s my conversation with KION’s Mark Carbonaro in Salinas, California.

Behring Breivik, who has confessed to killing 77 people in Norway last summer, told the court Thursday that he used video games to help him train for his massacre.

Specifically, Breivik claims he used Call of Duty: Modern Warfare 2 as a tool to “train” for the killings, saying it helped him improve his shot with a “holographic aiming device.”