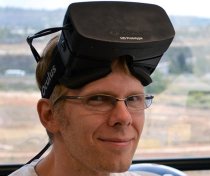 Carmack, widely credited as the creator of the first-person shooter genre, has taken a new job.

The co-founder of id Software — and one of the most highly-regarded developers in the industry — was today announced as the new chief technical officer at Oculus VR, makers of the Oculus Rift virtual reality headset.