As the iPhone has stolen the media spotlight and 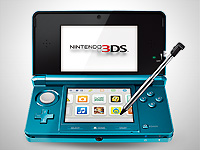 been touted as the sole competitor for Nintendo’s dominance of the mobile gaming market, Sony has been somewhat left in the shadows.

That’s understandable, to a point. The company’s first handheld gaming system – the PSP (PlayStation Portable) – never quite lived up to its promise as a true rival to Nintendo’s dominance of the market. And despite the company’s efforts to refresh the PSP brand over the past six years, it never hit the cultural zeitgeist that many expected.