Take this one with a grain of salt: A really big grain.

The man who brought Spider-Man, Iron Man and the X-Men to the big screen may have his eyes on Pac-Man. 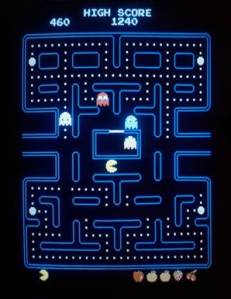 Ari Avad, former CEO of Marvel Studios and current executive advisor for Namco Bandai, will be on hand at an E3 party celebrating the world’s best known pellet eater “to make an announcement about the worldwide premiere of his newest Pac-Man project.”

The anticipation levels for “Starcraft II” are already sky high – but now Blizzard Entertainment has found a way that could make the game an even bigger time sucker.

Blizzard and Facebook have struck a deal, which will integrate the social network into Blizzard’s Battle.net service. That means players of “Starcraft II: Wings of Liberty” will be able to find Facebook friends who are also on Battle.net, making it easier to play a game with them.

profit off of the video game industry may need to rethink their methods. A panel of industry executives and analysts at the Digital Hollywood conference noted late Tuesday that the old ways of making money from the industry just don’t work any more.

So far, the only games we’ve heard about

that will take advantage of Move, Sony’s motion sensor controller, have been internal studios. Now, Disney has joined the team.

Disney Interactive Studios plans to utilize the Move in “Toy Story 3: The Video Game”. It’s part of a broader relationship between the two. The game will also feature content and gameplay that’s only available on the PS3, which some may view as a notice to Nintendo, which has been the home to the vast majority of child-friendly games this console generation.

Less than two months after the founders of Infinity Ward sued Activision over (among other things) unpaid royalties, over three dozen staffers of the development studio are following in their footsteps.

38 current and former employees of Infinity Ward have filed suit against the publisher, saying Activision has withheld royalty payments game “in an attempt to keep the employees hostage so that Activision could reap the benefit of the completion of Modern Warfare 3.”

The Supreme Court’s decision to hear arguments on a California law prohibiting the sale or rental of violent video games to minors that a lower body had ruled unconstitutional has the industry chattering today.

Here’s a sample of the reactions from people in and around the video game world:

The debate over whether violent video games are bad for minors is going in front of the Supreme Court. The Court on Monday agreed to review a California law that bans the sale or rental of violent games to children.

It’s a bit of a surprise move by the Court, which many expected would decline to hear California’s appeal of the case after last week’s decision overturning a ban on depictions of animal cruelty for being too broad. (Experts say the wording of both laws in question were similar.)

Microsoft and Sony have been waging war over whose

gaming system has more mass-market features since the beginning of this generation. Score the latest round to Sony.

The company and Major League Baseball have struck a deal that will result in MLB games streaming live via the PS3 effective today. To watch ‘em, though, you’ll need a subscription to MLB.com – and that will run you over $100 per year.

It’s no secret that Microsoft has always had broader plans for the Xbox 360 than video games, but a new report from Bloomberg indicates the company may be thinking of something much more ambitious than anyone expected.

Microsoft and former News Corp. president Peter Chernin have reportedly discussed creating a television channel that would air exclusively on Xbox Live and feature a mix of original programming and reruns. News of the discussions comes on the heels of reports that Conan O’Brien considered moving his show to Xbox before deciding to go with TBS.