Electronic Arts has found itself in the midst of a legal battle with Bell Helicopter parent Textron over the game maker’s use of images of real world helicopters in the game. 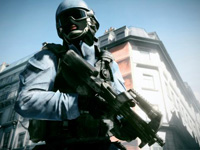 little doubt the videogame industry will once again end the year with negative growth, publishers are certainly positioning themselves to go out with good fight this holiday season.

The lineup of major franchises releasing games in the fourth quarter is unparalleled this year and could be a boon for both players and game makers — and, ultimately, investors.

The cost of war

is high at Electronic Arts, but the rewards are even higher.

Battlefield 3, the company’s answer to industry juggernaut Call of Duty: Modern Warfare 3, has burst out of the gate by selling 5 million copies in its first week alone. That’s a record for EA and enough to make it the industry’s best launch this year — though it probably won’t hold that title for long.

snatched away bragging rights for the year’s biggest video game launch as the company’s much anticipated ”Battlefield 3” has sold more than 5 million units in its first week, making it the fastest-selling game in the company’s history.

The big bow unseats Microsoft’s ”Gears of War 3,” which boasted first week sales of 3 million copies in September — but it’s likely to be a short-lived victory. The launch of ”Call of Duty: Modern Warfare 3” is expected to set entertainment industry launch records, as the series has done for the past two years.

between EA’s Battlefield 3 and Activision’s Modern Warfare 3 is not a zero-sum game — both publishers can come out as winners, says Gamasutra editor-at-large Chris Morris.

And so it begins. After months of sniping, posing and stare downs, Electronic Arts and Activision officially went to war Tuesday, with Battlefield 3 hitting store shelves, hoping to knock the Call of Duty series from its king of the hill position in the action shooter genre.

That’s how the story has been set up, at least. The battle of titans makes for a great headline, after all. And as we all learned from the movie Highlander, there can be only one, right? Poppycock.

been a lot of love lost between Activision and Electronic Arts. The two video game publishers fight over just about everything.

But with Tuesday’s launch of EA’s “Battlefield 3,” the clash is taking on a particular sense of importance. At stake: The supremely profitable shooter genre – and possibly the fate of EA’s long-in-the-making turnaround.

For the past few

months, the war of words between Activision and Electronic Arts over their respective modern military shooters has been intense, to say the least. EA has been eager to unseat Call of Duty from its king-of-the-hill spot and hasn’t shied away from trash talking to do so.

On Tuesday, the company’s best bet to accomplish this — Battlefield 3 — will hit store shelves. And while EA’s marketing machine is about to go into overdrive, analysts say the fight may be over before it starts.

Bunim/Murray Productions, creators of “The Real World” and “The Challenge,” have announced plans to team with CBS Interactive division GameSpot to launch “The Controller,” an online show based on Electronic Arts upcoming action shooter video game “Battlefield 3”.

for first blood in the slugfest of realistic military action games this fall.

The publisher announced at its pre-E3 press conference that “Battlefield 3” would hit shelves Oct. 25, two weeks before Activision releases its much-anticipated “Call of Duty: Modern Warfare 3.” Both titles are expected to be massive hits this holiday. 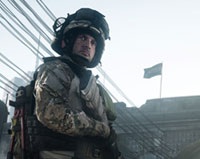 publishers Activision and Electronic Arts, but this November the studios are planning their biggest battle yet.

EA CEO John Riccitiello, speaking at the Ad Age Digital Conference this week, confirmed that upcoming shooter Battlefield 3 will be released in November, putting it in a head-to-head battle with the latest Call of Duty game — widely expected to be Modern Warfare 3.