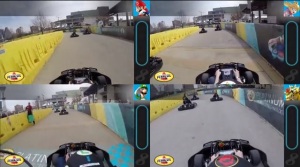 game might be named after him, but there was no way I was going to let Mario win this race. After all, this is apparently still the year of Luigi.

That sort of competitive thinking generally goes through my mind whenever I play Mario Kart on a couch, but when you’re sitting in a real Kart with real speed boosts and obstacles, it’s only amplified.

by Southwest may be a haven for music and film lovers, but it has increasingly become known as a geek hotspot.

music industry, the annual South by Southwest has had a number of business success stories as well.

Some of the biggest Internet brands took off at the show – and several notable up and coming sites have the Austin get-together to thank for their early traction. Here are some of the most notable success stories.

The annual South by Southwest conference

has always been viewed as a place for independent artists and startups to shine. Musicians, filmmakers and new tech companies all compete for awareness among the show’s influential show goers (who often act as evangelists for what they like when they return home).

With the surge of growth in SXSW, though, large companies have invaded the show, looking to capitalize on that same audience, to build awareness for their new products or try to woo some of those evangelists to sing their praises when they return home.

Some, though, just want to cash in on the crowd.

The annual South by Southwest gathering

has plenty of success stories to crow about, but getting a big break here is harder than ever these days.

The show, dubbed “geek spring break” by some, has grown beyond its music and film roots to become a gathering spot for venture capitalists and some of the biggest stars in the tech world. But as it has grown, it has become more difficult for startups to turn heads.