the widely acclaimed introduction of the iPhone 6, Apple Watch and Apple Pay a month ago, Tim Cook is ready to take a victory lap. But the energy surrounding this week’s expected roll out of a new slate of iPads and new MacBook and iMac models is significantly lower than that of a month ago.

Unlike September’s big iPhone, Apple Watch reveal, this time there don’t appear to be any paradigm shifting announcements in store.

footprint in the video game world is getting bigger. And that could be good news for the company’s bottom line.

Gaming makes up the lion’s share of the mobile software world, with consumers buying games more frequently than any other type of app. And with the recent launch of the large screen iPhone 6 Plus and Thursday’s expected introduction of a souped-up iPad, Apple could become an even larger player in the category.

does it seem like your kids are perpetually staring at screens while the toys they’ve twisted your arm to buy them lie ignored on the floor?

history of Star Wars games is filled with hits and misses. For every Battlefront, there’s a Masters of Teras Kasi.

But Bioware’s Knights of the Old Republic, released in 2003, has always stood head and shoulders above the rest — and now it’s coming to the mobile gaming world.

might have scored a key courtroom victory against Samsung late last week, but the fight is hardly over between the two tech giants.

may not have the artistic skill to put together a comic book, but now there’s an app that circumvents that problem.

Thursday, I join Chris Salcedo and Lori Lundin on the mid-day edition of America’s Radio News Network to discuss trends and news in the technology and video game space. This week’s topics were Sony’s restructuring, the Dept. of Justice’s antitrust case against Apple and several book publishers (which could result in lower eBook prices) and the heartwarming story of Caine’s Arcade.

Apple has a well-earned reputation as the inventor of new markets, it’s also something of a serial killer.

The company’s advances in digital music players made the Walkman an afterthought. The introduction of iTunes sounded a virtual death knell for many record retailers. The iPad cut the legs out from under the once fast-growing netbook PC market. And the iPhone has put Motorola in a fight for its life. 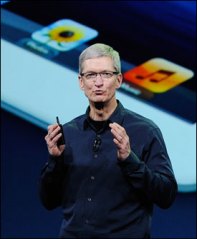 Hollywood continues to expand its options for how and where auds access its content, Apple is amping up the capabilities of the devices on which they consume that content, announcing Wednesday the forthcoming release of a 4G-compatible iPad, a high-def version of its Apple TV device and the expansion of its iCloud storage service to include movies.

Following much speculation regarding what innovations the next-generation iPad would feature, the company revealed that the new tablets will harness the next generation of 4G networks of Verizon, AT&T and other carriers worldwide and feature the Retina display that’s now part of the iPhone.

there weren’t any major surprises at Wednesday’s Apple event, that’s not slowing down the excitement among the Apple faithful for the new iPad.

Apple, as expected, rolled out its latest version of the popular tablet device Wednesday at a Gamasutra-attended event, showcasing a greatly improved display screen and the inclusion of 4G compatibility. And the device was supported by a pair of notable gaming companies.