multiyear losing streak by the video game industry finally came to an end in 2014, though any celebrations may be muted.

Total sales of video game hardware and software came in at $13.1 billion in the U.S., a one percent increase over the 2013 totals,according to The NPD Group. That’s a small bump, but it’s the first time the industry has seen an overall sales increase since 2008.

underestimate the power of a price cut.

On the heels of Microsoft lowering the cost of the Xbox One by $100, video game hardware sales in June more than doubled the totals of the prior year, coming in at $292.7 million last month, according to the NPD Group.

hacker and a kart racer have delivered some unabashedly good news to console makers and game publishers.

Sales of both video game hardware and software were up — way up — in May, delivering the first solid month the industry has seen for some time.

next generation of consoles is starting to shake up the sales charts.

With the release of the PlayStation 4 and Xbox One, there’s a new mid-year sales leader in the videogame industry—and it’s not Call of Duty for a change.

This year’s list, in fact, is full of changes—perhaps none so remarkable as the strong showing of Lego. A pair of games based on the children’s toys are among the top-selling titles so far in 2014. And Minecraft, the little indie game that became a juggernaut (selling over 15 million copies life-to-date), has shoved some familiar franchises off the list.

may not be buying a ton of games these days, but they’re sure gobbling up game systems.

Sales of video game hardware in March were up a massive 78 percent in March as compared to a year ago, according to The NPD Group. Console sales more than doubled as demand continues for the Xbox One and PlayStation 4. That surge in hardware sales led to a 3 percent climb in overall sales versus March 2013. 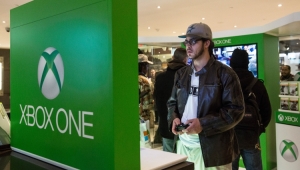 Xbox One might have won December, but the PS4 is winning the war.

According to brick and mortar retail tracker The NPD Group, both of Microsoft’s consoles outperformed Sony’s in the final month of 2013 in the U.S. Microsoft sold 908,000 Xbox Ones and 643,000 Xbox 360s in December, surpassing the totals for both the PS4 and PS3, though Sony did not provide specific numbers.

say the PlayStation 4 and Xbox One are off to a strong start is the understatement of the year.

The November sales of both systems topped not only the first month of the PlayStation 3 and Xbox 360 – but sold more units than their predecessors did in their first three to four months following their launches, according to BMO Capital Markets analyst Edward Williams.

Overall, when hardware, software and accessories — including subscription cards for Xbox Live and PlayStation Plus — were added up, the industry posted sales of $2.7 billion at retail stores last month, a 7 percent increase over 2012, reports the NPD Group.

Michael and Franklin might be particularly vicious criminals in Grand Theft Auto V, but they’re heroes to the video game industry.

Grand Theft Auto helped propel the industry into positive growth for the third consecutive month in October. Software sales at brick and mortar retail stores were up 12 percent compared to the October 2012 figures, coming in at $482.5 million. 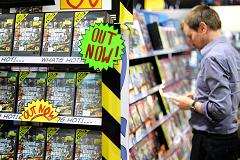 video game industry hasn’t done a lot to endear itself to investors in the past few years. Competition from the mobile space, player fatigue with the lack of innovation and aging console systems have resulted in slumping annual software sales since 2009.

But it has shown signs of life in the past two months. Game software sales were up 52 percent last month from a year earlier, after rising 23 percent in August, according to The NPD Group.

Analysts say that momentum could continue into the holiday season and beyond.