Mattrick, the leader of Microsoft’s Xbox team since 2007, is reportedly leaving the company.

All Things D reports Mattrick is close to taking the CEO position at struggling social game maker Zynga. An announcement may come as early as the end of the day.

Xbox team has got to feel a little like a punching bag these days.

Even after an unprecedented policy reversal in which Microsoft shockingly changed its stance on used games and mandatory Internet connectivity on the Xbox One, the company is still facing criticism — this time from gamers who argue that Microsoft should have stuck by its guns.

than one week after E3, Microsoft has announced a major policy change on the most controversial policies of the Xbox One, bowing to growing negative consumer sentiment.

In a stunning reversal, the company announced that the system would no longer require an Internet connection (beyond an initial period when users first set up their system), dropped all restrictions on trading and loaning games to friends and did away with region-locking restrictions.

Microsoft Studios’ creative director Adam Orth is going to have to learn to deal with it for a little while.

Orth, whose controversial Twitter comments about always-on connectivity last week stirred up gamers and forced a public apology from the Redmond-based company, is no longer employed at Microsoft.

Will the next Xbox continue the reign of success Microsoft has seen this generation or will it stumble Sony-style, losing momentum at a critical junction for console systems? The answer could lie in a single feature.

Kotaku recently reignited the rumor about the next Xbox requiring a constant connection to the Internet – and Microsoft Studios’ creative director did nothing to put out that growing brushfire with his Twitter fiasco last week.

Will the next generation Xbox require an ‘always-on’ connection? There’s nothing to base that on right now except for rumors and the echo chamber of the Internet. But, for the sake of argument alone, let’s say that is an upcoming feature. Is it as bad as it seems?

much too early to dub Nintendo’s next-generation videogame system a failure, but it’s certainly off to a lousy start.

The Wii U sold just 46,000 hardware units in January at brick and mortar locations — a shockingly low number for a console that was just released in late November. To put it in perspective, the Wii sold 348,000 units during that system’s comparable period in 2007.

you thought cell phones were a drive time distraction, just wait until people are trying to play Kinectimals during rush hour.

A want-ad placed by Microsoft’s Connected Car team indicates that the company is investigating ways to include Kinect’s motion-sensing technology into vehicles as it strives to become a player in the “smart car” field.

The launch of Kinect for Xbox 360

was one of the big success stories of holiday 2010. With life -to-date sales of over 10 million units, the motion sensor controller caught the imagination of the casual audience, while boosting console and software sales at the same time.

But the months that have followed have been pretty barren. There have been no major Kinect releases since December and that has consumers getting antsy.

With backings by Oprah Winfrey, Ellen 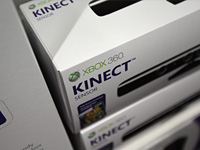 DeGeneres and just about every gift guide the media has written, Kinect for the Xbox 360 has become the “must have” gift of the 2010 holiday season.

The motion capture device has sold more than 2.5 million units since its Nov. 4 launch and Microsoft seems well on pace to meet its sales target of 5 million before the end of the calendar year. But do those sales mean it’s time to buy Microsoft shares?